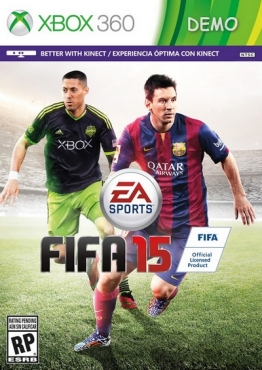 Description:
FIFA 15 raises the realism of games of football to new heights by giving fans the opportunity to fully experience the tension and intensity of emotions favorite sport.During football matches, you will see how passionately greet your favorite team fans in the stands, and thanks to the dynamic presentation of the match (Dynamic Match Presentation) uslyshite vivid description of the game from the best commentators.

For the first time in the history of the franchise all 22 players will be connected to emotional intelligence (Emotional Intelligence) - they will be able to respond to opponents and teammates, depending on whatIt occurs at this point in the field. Great graphics (Visuals) of new generation allows maximum detail to reproduce the situation of the game with the effect of live stadium (Living Pitches) - you'll see how the grass trampled and istaptyvaetsya during the match.

System of a realistic image of the players (Authentic Player Visuals) show players toned, muscular athletes, like their counterparts.The new system of control over players (Player Control) will allow players to control more confident, improve their movement will make the fight for the ball (Man-to-Man Battles) and more spectacularexciting. Football - a game full of tension and drama, and FIFA 15 allows fans to fully experience the full emotional intensity of football matches.