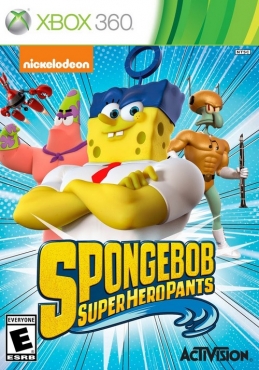 Description:
SpongeBob HeroPants is a platformer in which the player will have to solve simple puzzles, explore the world and fight enemies. Among the playable characters have appeared SpongeBob, Patrick, Squidward, Sandy, Mr. Krabs and Plankton.
Each of the characters will be able to transform into a super champion, because of this they will be able to overcome difficulties and to fight the crazy imagination of Sponge Bob. The SpongeBob HeroPants will battle with the bosses, the opportunity to improve the characters and find hidden objects.

More info:
= Only the hero dares to plumb the depths of the mind Sponge Bob, covered with cotton candy and rainbows shine!
= Play as your favorite character in the classic manner or in the form of characters in the film! Play even Plankton!
= Make your way through the obstacles and puzzles on popular locations including Bikini Atoll!
= Mode multiplayer games on the system Xbox 360 - Up to 4 people at a time!