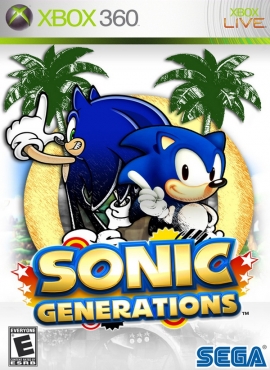 Description:
What is the best Sonic on Szego definitely yes, but a game of Sonic Generations, and you remember what was in the Szego not leave the game until the end, here as a high-speed 3D and 2D levels as it was in the very good times!

Pass with Sonic all the steps including those that were on the Szego, new and old music will make you remember what was and what is now.Sega tried their best with this part of excellent graphics, fast speed, the levels in 3D and in 2D made great villains were as they were tricky and difficult, as there are stages with such drimkasta city.
This part is done all that you have become quite one of the best games of Sonic you do not doubt it is really like and you want to go through it completely, and discover all the secrets of the game!