Alone in the Dark: The New Nightmare (PS1 entirely in Russian) 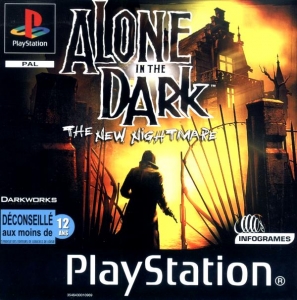 Description:
In this game we were first used polygonal character models, prorenderennye background'y and switching angles with fixed cameras.Visually it looked a little strange, even for that time. Imagine a square, triangular shapes, awkwardly paced primitive "daubed" locations.

However, a specific spirit, style and atmosphere of the game makes it really scary and exciting. Personally, I still remember it frightening, mystical music to sing. The game appeared, followed inevitably continue. However, by not had much success.
Gone somewhere atmosphere of fear, and the schedule they remained virtually unchanged. But time runs forward, and on the way another series once famous game that has all the chances to get the highest score.

To summarize, we have very high quality continuation of the cult series. The game is recommended to all fans of the genre as a survival horror, and just lovers to spend time with his Playstation.