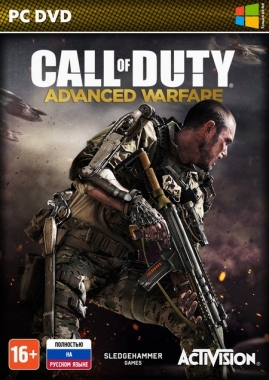 Description:
The future knows no mercy.On the ruins of the old world that has survived the collapse of the usual geopolitical and military structures, a new force - the private military company, whose leadership wants to bring hope to humanitya decent life. Technique against anarchy, iron order against chaos. Welcome to 2054, where there is a war.

Call of Duty: Advanced Warfare It developed over three years, taking into account all the possibilities of a new generation of game systems. This new approach to the creation of games will apply the new tactics.Advanced military technology and unique exoskeleton help to survive where ordinary soldiers would not last five minutes! In addition, you expect a fascinating plot and new characters, one of which is the role played winner "Oscar" Kevin Spacey.

Features
Advanced World
Story Call of Duty: Advanced Warfare It develops in the estimated future which proved largely predetermined by the penetration of technological progress in the military sphere.
In this carefully crafted world of the future, private military corporations (PMCs) have become the dominant force for many countries, attracting the army on the side redraw the boundaries and rewriting the rules of war.
Jonathan Irons, founder and president of the world's largest PMCs - Atlas Corporation - is the epicenter of events.

Improved soldiers
Powerful exoskeletons completely change the concept of training soldiers, making them deadly in battle and eliminating the need for separate military specializations.
The introduction of this element of the game has improved the mechanics of movement of players, add high jumps and clinging, a system of invisibility and biomechanics, providing unmatched strength, perception, endurance and speed.
With the development of improved and new exoskeleton armor and weapons each soldier takes unprecedented tactical freedom, regardless of the terrain, which reverses the usual players Call of Duty game design in all modes.

Enhanced arsenal
Using the power of next generation platforms, Call of Duty:Advanced Warfare will bring the players on the battlefield of the future with high-tech arsenal of advanced and a set of skills, providing them with brand new equipment, technologies, and perks such techniques as hoverbayki and specialized drones.
Players will also be able to choose between conventional ammunition and a unique energy weapon, which completely changes the dynamics of the gameplay. With exoskeletons that give unprecedented power and tactical freedom, Call of Duty: Advanced Warfare makes evolution in the genre of shooters.

Features RiP'a:
The basis is taken license content.
- Do not recoded.
- Removed the multiplayer.
- Archives of the game is not affected.
- The ability to combine text and voice.
- Game Version: 1.3.0.6297.
- Installation time: ~ 40 minutes and a minute more | depends on the power of the computer.

FAQ on installing and running repack:
I can not start the game / nothing happens / run steam / complain about the lack of steam_api.dll, uplay_r1_loader.dll, etc.Disable antivirus, reinstall the game and add a folder with a game of exceptions antivirus. Even if the anti-virus is not present, then it could easily make the Defender Windows. Error: no file not found msvc ***. Dll. Install the Microsoft Visual C ++ Redistributable. Oh my God, in repake VIRUS !!!!

What do i do !? No viruses repack no! This is a common reaction of anti-virus on some pills. Just turn off the antivirus during installation and add a folder with a game of elimination. Run impossible, because your computer does not
d3dx*_**.dll/D3DCompiler_**.dll/X3DAudio*_*.dll/xactengine*_*.dll/XAPOFX*_*.dll/XAudio*_*.dll/xinput*_*.dll. Install DirectX. ISDone.dll Unarc.dll returned error code: - **. 1.Pereheshirovat torrent distribution and off during installation, disable antivirus, install Installer Compatibility with Win XP SP 3 and Run as administrator

To Win 8:
2. On the setup.exe file in the properties section to set the security on the user full access tobish put all the checkboxes. Properties setup.exe-u003e Security-u003e Change and then at every profiles where we put a tick allow full access. Put compatibility mode with Win 7, Run as administrator. The requirement is written that the game is only for x64 systems, whether it is run on x32 system?
No. The sound disappears / is delayed or advanced. Reinstall the sound card drivers. Lower graphics settings in the game. Does playing the Win XP / 7/8?

Read the system requirements, and if in doubt, check the swing and distribution themselves.All hand before putting some checked (at least to start, usually on Win 7 x64), the rest depends on your system. The game does not start / stop / flies / artifacts present.Install the latest drivers for your video card, DirectX, Microsoft Visual C ++ Redistributable, Microsoft .NET Framework. The game can not be played videos. Try to install / remove the K-Lite Codec Pack. In the game instead of the key characters.

Change the default keyboard layout (see. The example below) to English.When you start the game I get an error "The game requires a video card compatible with DirectX 11," or similar in English.Make sure that your card supports DirectX11 (not related to the version of DirectX installed on your system, it is necessary to recognize the characteristics of a video card). If the card still supports DirectX11, then install DirectX and the latest drivers for the video card.

My card supports DirectX11, I installed the latest drivers and DirectX, but when you start still pops up the error "The game requires a video card compatible with DirectX 11."Typically, this problem occurs on laptops when the system tries to start the game on an integrated map, instead of discrete. Open the "Control Panel NVidia" (located in the Control Panel Windows) and choose "High performance."