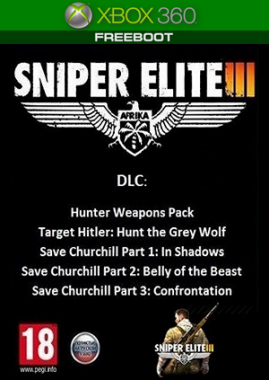 Description:
The Sniper Elite 3 emphasis is on providing freedom of choice to the player. The game shows a large and diverse world, allows you to use different tactics and playing styles. The action takes place in an exotic and deadly North Africa during the Second World War.

Special Agent USS Carl Fairbairn penetrate behind enemy lines, to using his skills of an experienced sniper to help the Allies to fight the formidable German tanks "Tiger" in the Western Desert.But the main concern of Karl - not the famous Afrika Korps. Soon he finds out about plans to establish a German «wunderwaffe» - a miracle weapon, capable to crush everything in its path and turn the entire course of the war.

- DLC Hunting Grey Wolf In this mission, Hitler and his double came with a secret visit to the Libyan port city of Tobruk in 1942. Your task - to eliminate Hitler.Hence the name additions - Grey Wolf, that's what it was called allies.Players will enter the city, using stealth and sniper skills, then track down Adolf and make the decisive shot. Each passage of this mission will be unique because of the extensive protection and the ultimate goal of randomization and events. You can not guess a riddle and kill double.

- DLC Save Churchill: Part 1 - In the shadow of the first mini-campaign "Save Churchill" for Sniper Elite 3. Exploration learned about the planned attempt on Winston Churchill. You will be able to find the killers and stop them before it's too late.

- DLC Save Churchill: Part 2 - At the mouth of the beast The second part of the mini-campaign "Save Churchill" for Sniper Elite 3. Karl managed to track down the killers and to find their secret base in the mountains. Find out what they're up to and where they are going to arrange the attack on the Prime Minister.

- DLC Save Churchill: Part 3 - The final confrontation of the mini-campaign "Save Churchill" for Sniper Elite 3. Assassin's going to attack Winston Churchill on the outskirts of Casablanca. Stop them and measure themselves with their mysterious leader.