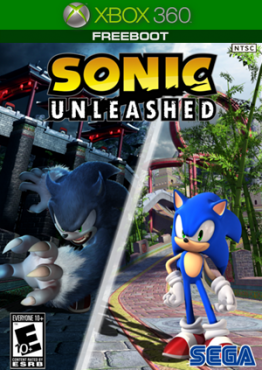 Description:
Sonic Unleashed It is based on a new graphics engine Hedgehog Engine, which is responsible for a smooth transition from the camera to the two-dimensional three-dimensional image, and demonstrates in this rich and vast outside world.
In the three years that the tested engine, the developers have managed to combine beautiful visuals of the new generation with the classic gameplay of the original - something that was lacking in the last fans of Sonic games.

Sonic is trapped in the battle for one of the spaceships Dr. Eggman.Eggman uses some device for extracting power from the Chaos Emeralds, and turns it into a beam that sends to Earth, the planet splitting into several parts, thereby prompting the creature called Dark Gaia.
Then he throws Sonic overboard straight into space along with the already useless Chaos Emeralds.