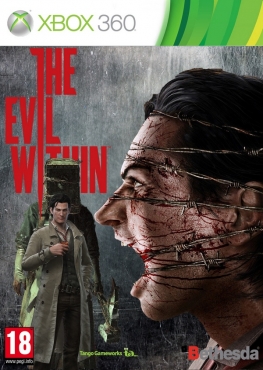 Description:
The Evil Within - The main character is a detective named Sebastian. Together with his partner, he promptly arrives at the brutal crime, initially shrouded in a variety neponyatok.At this point, the mystic power, apparently awaiting the arrival of the officers, provoked a shootout between police, during which they began to thrust into each other bullets.

Before the eyes of Sebastian bloody spectacle unfolded. Taken aback, he watched this painting up until and did not come under attack and lost consciousness.When he awoke, Sebastian finds himself in a strange place, where roam creepy monsters. Under our leadership he has to go through all the circles of hell and get to the truth of what is happening!

The Evil Within He is trying to find the right balance between horror and action, forcing the player desperate to survive, passing through a series of unimaginable horrors. Team Mikami wants to rethink the genre and make it more difficult and saturated!

Extras. Info:
The Evil Within Review
= "The key task - to create horror. Such that you said in my life is nothing worse than not seen. "
= "The horror - a double edged sword. On the one hand, it should be a lot, not to get the gunman, not horror. On the other - the player can not do too helpless, otherwise the game will be boring. The trick is to find the right balance. "

= Three detectives must investigate the crime scene. The police are already in place - the detectives arrive later. Around some reason no one is empty the machine.Heroes come into the room and see a mountain of corpses. Here the main character someone beats in the back and he loses consciousness. He wakes up in the same spot where he fell ... Almost. Everything is a little transformed. The initial task - to understand where you are caught and how it is connected with the murders.

= "We want to create a truly eerie setting. To make it look terrible. But the zombies will also be the usual. "

= You do not know exactly how and where the attack certain monsters.

= In the arsenal player - shotguns, knives, axes. And traps. They can lure the enemy, this is one of the most important features.
= The best moment in horror, it's not when you crap one's pants from fear, but when the barrel was the last cartridge, the monster you pressed to the wall, and you killed him accurate headshot. Here is «YES!» After enormous effort is the essence of horror.

= The main character named Sebastian (the rumors are true). Mate - Joseph and Kid (a girl).

= Venue - abandoned hospital (well, that was quite clear in the English use the best in the world the word "asylum").

= Game in the third person. The camera is fixed to the maximum angle of the shoulder cinematic hero, so that you can survey the whole perspective entirely.

= The room surveillance Sebastian sees a wounded doctor, until the monitor is fixed, as someone in the hood of the police tearing. Suddenly, that someone appears behind Sebastian and stuns him.

= Comes to life hero, hanging upside down in a slaughterhouse. Next - about the same people hanging upside down, only to have the dead, ready for cutting.Butcher (big man in an apron and a chainsaw) just removes the hook corpse lay on the table ... At this point, Sebastian runs. You need to hide distracting butcher, throwing bottles, then that is urine escape from it. Wrong - get a saw in his throat.

= The second level in the demo - in a mysterious mansion. It is linear, as the level of a slaughterhouse, but the developers promise to add more locations open to for some time to give us a break.

= Show three types of enemies. The first two - the usual zombies. Sluggish, go slowly, in the style, of course, the first parts of Resident Evil. They need to shoot a gun from a distance. Still it is possible to put a trap, so they stood there. Some overtightened barbed wire sticking out from other pieces of glass.
= The third type - multiarm-legged beauty from the trailer. It grows from a puddle of blood running to the hero kills.

= The main feature, according to Mikami on the go changing geometry levels. Here you comes a crowd of zombies, you pyatites back down the corridor, aimed shots biting monsters.Suddenly back to rest against something hard ... Wall! Only that it was not. In these foci must be tied the lion's share of puzzles and clashes with monsters. Doors will fade and change, stairs leading to one room, suddenly can lead a completely different place.