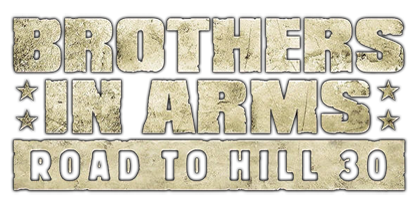 Description:
Brothers In Arms _ Game based on real events. Sergeant Matt Baker of the 101st Airborne Division and his platoon abandoned in one of the rural areas of France.
As the events will unfold, you have to choose between the successful execution of the job and the lives of soldiers - your brothers in arms.
«Brothers In Arms» immerse you in a historically accurate atmosphere of World War II. Becoming a member of the eight operations in Normandy, you will get an unforgettable experience as the commander of a small detachment of troops.
Powerful graphics engine (one of the most famous and cult shooter) allows for unprecedented realism. The developers are proud of unparalleled historical authenticity game, as well as the quality of sound and addictive gameplay.

Features:
- The unique game. «Brothers In Arms» - only a tactical first-person shooter on the Second World War.
- The real fighting tactics. Intuitive and easy control platoon constructed as fans of shooters and hardcore fans of tactical simulation.
- Real soldiers. The game features more than 20 characters, each with a unique character, appearance and behavior.
- The revolutionary algorithm behavior enemy: both opponents and your allies are using clever maneuvers and tricks to bypass the enemy's flanks, surprise him and destroy.
- An unprecedented historical accuracy. Absolutely accurate reproduction of the battlefields, real events, weapons and clothing, recreated through the use of photos of US Army Signal Corps, the military intelligence archives and witnesses and participants in the events.

Brothers In Arms Earned In Blood

Description:
Based on a true story game Brothers In Arms Earned In Blood - The next chapter in the history of the 101st Airborne Division. In the role of Sergeant Joe Hartsock you have to move out of the thirtieth height and command a platoon of elite paratroopers in one of the most important operations of the Second World War - the liberation of Normandy.
During the recent fighting for the liberation of the French elite units of the 101st Airborne will operate deep behind enemy lines.Together with your squad you have to beat more experienced and aggressive opponents and survive the flaming ruins of the city. Brothers In Arms come back with even more action, a great story and a deep historical authenticity!

Features:
= Outstanding historical accuracy: together with the soldiers of the 101st Airborne you perform real combat missions, exactly recreated due to historical sources: pictures, maps and reports of American soldiers.
= New multiplayer missions: Brothers In Arms Earned In Blood prints online tactical battle to a new level, offering a unique mission and improved network code.
= Additional weapons and equipment: ekipirutyes new types of weapons, such as grenades, M3, and manage new types of equipment, such as a tank destroyer M10 «Wolverine».
= Innovation Management: How commander, you can control your fighters via efficient, but at the same time easy and efficient command system using a single button mouse. 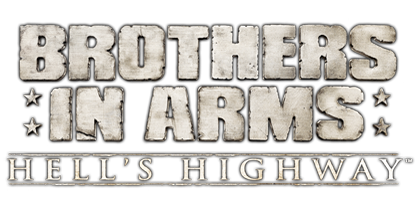 Description:
The Second World War. One hundred and first Airborne Division again in fight behind enemy lines ...
You will meet again with friends from previous games series Brothers in Arms characters ─ Sergeants Matt Baker and Joe Hartstokom ─ and take part in the largest airborne operations during the Second World ─ operation "Market-Garden".
Unprecedented graphics and unique gameplay will help you feel in the skin of the paratroopers.

Features:
= Brothers in Arms Hell`s Highway - A new word in a series of games BiA: using the latest achievements of the game, "iron", classic command shooter appears in a new light shining uniquely beautiful graphics and endless gaming opportunities
= New History. New turns of fate. Take part in impudent attempt to force the end of the war during Operation "Market-Garden" shoulder to shoulder with Baker, Hartstokom and the rest soldiers one hundred and first Airborne
= Feel paratroopers:push to the ground, while under heavy enemy fire, feel in their own skin fell in a few meters from your shell, get guidance from headquarters, patrol the area,ambush the enemy. Detect the enemy before he discovers you, it gives you a chance to survive fighting
= Up to an unprecedented level of development of today's characters.Protagonists of game talk, move and act like real people, graphic level of detail put into a qualitatively new level of realism.Throughout the game characters will behave like true brothers in arms, offering ammunition, helping wounded companions and civilians, gathering in commands for management of heavy long-range weapons
= The rich part of the film: as a commander unit, you will work closely with your comrades in arms, each of which has its own history and their personal qualities that will become brighter and brighter to emerge in the course of the game
= New ways to use of heavy weapons: you can create a squad for the management of heavy machine guns, and rocket and grenade launchers to destroy enemy tanks and buildings, mortars to attack from distant positions
= Unique sensations from the multiuser mode: you will find what has always distinguished series of BiA, what made it so popular with players from all over the world - a combination of drive and easy mode Deathmatch c command shooter gameplay
= Nothing lasts forever: Choose wisely shelters for their soldiers as a weapon in the game, in accordance with real physical laws, can hurt, burn or destroy almost any object game environment!

Features rips
Brothers in Arms: Road to Hill 30
Game Version - v1.11.
Do not recoded.
Cut out the multiplayer, Credits (credits developers).
Ability to select a combination of text and voice.