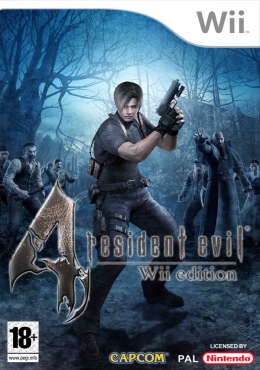 Description:
Leon Kennedy, known to fans of the series for the second part of the game comes in the dead of a Spanish village, hoping to find the kidnapped daughter of the president, but faces possessed by some demon peasants throw at any outsider.
Later he will meet with the mysterious cult, defeat bosses, and many heinous complete the task, but is his main goal - not to lose, in the literal sense, the head at the first meeting with the armed rural chainsaw maniac.

Wii version was created based on the original game's GameCube. Wii-version is superior to other ports on the quality of the graphics, and supports wide-screen mode 16: 91 ~~~ 91 ~~~ 1.
This version includes support for Wii Remote Controller and Nunchuk, along with the ability to use the Classic Controller. The controller allows you to quickly apply a knife and facilitates the game in dynamic scenes. The publication also includes all additional content. So you do not have to miss!