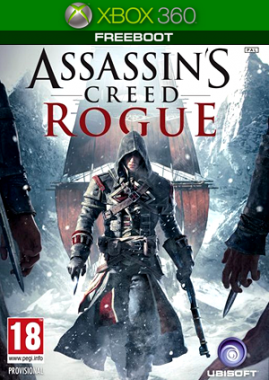 Description:
Action Assassin's Creed Rogue It is set in the mid-18th century during the Seven Years War. Play for Patrick Cormack Shay (Shay Patrick Cormac) - Templar Assassin Hunter, who was himself one of them.
The conversion process in the most terrible murderer Assassins represented in the game. In Assassin's Creed Rogue will be new locations in North America: ice-covered North Atlantic, Appalachian river valley and New York.
-
Naval component, which appeared in previous drafts, in Assassin's Creed Rogue has been improved. The enemies have a new tactic - they can go to the boarding.You will have a ship named Morrigan. Shay will be able to use new weapons for sushi (air rifle, special grenade) and sea (burning oil, puckle gun - gun with drums).You will be able to shoot the iceberg. With the help of an eagle's view need to detect hiding in the crowd and on the roofs of the Assassins.

CAUTION
Mandatory conditions for running:
1. After starting the game go to the Settings - Sound - the language of dialogue, set English (otherwise there will be voice)
2.Nezabyvaem include subtitles in Settings - Videos - Subtitles.