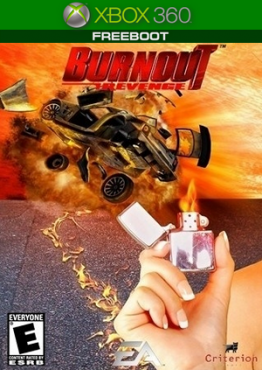 Description:
Perhaps in this life you do not smash single "Lamborghini Diablo" never exceed the speed and would not enter into a dispute with the traffic lights. Nothing wrong!
Because with Burnout Revenge, the new super-fast racing game from Electronic Arts, you'll be something to tell the grandchildren!Forget about what you were taught in driving school, do not bring traffic rules and do finally what secretly dream of receipt of a driver's license: Gromov "cork" punish "dummies", the demolition of traffic lights at a speed of two hundred miles in hour!

Features:
The hour of revenge!
The main thing is not to win, most importantly - spread the pieces as much as possible machines. The main idea of ​​the game - to make as much road follies. You are waiting for ten race modes - each with their own objectives, features and unique gameplay.
Traffic Attack
In the new mode, your goal - at any price to break through to the finish line in rush hour. No matter how many cars you send in a ditch, and how to explode. On the track all means are good.
Stunts.
City Burnout Revenge are designed so that each square meter of highway challenged your talents driver. Offers multi-level interchanges, steep turns, narrow arches, ramps for dizzying jumps, and much, much more.
Elegant collection of cars.
Futuristic cars three classes with realistic physics behavior - the differences are manifested in the management of raznoprivodnymi machines and impact damage to the ride.
Places of military glory.
The game takes place on the streets of real cities - Rome, Tokyo, Detroit and many others.