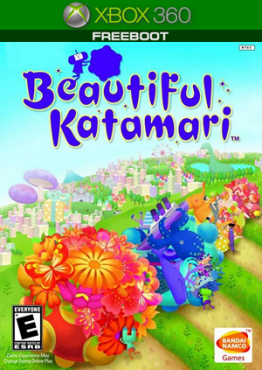 Description:
Beautiful Katamari - a colorful and exciting game, the meaning of which boils down to, to roll the ball on numerous levels, able to stick to his subjects relevant dimensions and become more.
The greater the ball, the larger objects it is able to attach itself, and the more things - the larger it becomes. New music, characters, stages, online and offline multiplayer modes, available through Xbox Live bonus content.

The offline multiplayer is as a cooperative (each player will stand to roll only one side of the ball, and only the well-coordinated work will lead to good results), and the usual competitive - to the larger diameter of the ball after a specified time.
Online, as up to four people will be able to measure the size of their Katamari, and collected a number of items of a particular type. Of course, not without a public record of the table, and the players opponents are expected to appear in the network will be able to entertain yourself with fun mini-games.