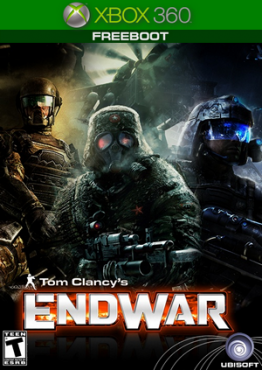 Description:
2020. Empire agreed on a global confrontation. Final for the human race the military conflict. The struggle for resources has never been conducted on such a scale.
"I do not know what will be fighting in the Third World, but in the Fourth World it will be sticks and stones" - so said Albert Einstein.

It corrects Tom Clancy - the most popular writer in the genre of "techno-thriller": in the last war will supermodern tanks, helicopters, computerized clothing, satellite weapons and, of course, powerful nuclear and hydrogen bombs. East and West. Their own and others.
Enemies and friends. Carpet bombing and sniper shots. Life and Death. Welcome in EndWar rutracker - last war of humanity.

Features:
= Futuristic machines in the global conflict of world powers.
= Simple and easy to use interface, designed for lovers of strategy and tactics.
= More than forty combat zones on Earth - from Washington and Paris to Moscow and Beijing.
= Hundreds of making desperate situations for the tactical genius.