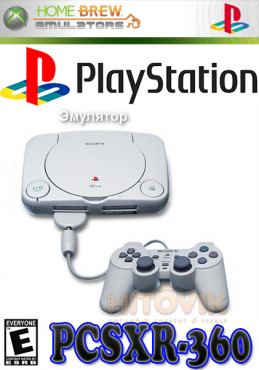 Description:
Ced2911 released his version of the emulator PS1/PSX/PSone PCSXR 360.
Emulator PCSXR 360 It has been greatly improved in recent years, and now it can also be launched directly from the Freeftyle 3 Dashboard'a !, and not as before through Hell.

Description PCSXR360 v2.0.6:
Version 2.0.6 is completely updated interface emulation has improved, the opportunity to download and covers the description of the games, as well as create a profile with the settings for each game.

It's not all functions (analog support (rumble works in some games), multi-disc support, the brightness has been set, as it is now possible to choose between a graphical interfaceStarr plug CDR (for CDDA raider 1,2 and games) and the new CDR for better compatibility for games like Jammer Lammy and probably other games!

Note: when we choose a graphical interface options using the new plug-in cord and try to download a game, the game will not load immediately. The emulator will start pcsxr_new.xex, is not nothing like the emulator with the new CDR sauce code compiled in the assembly. Simply select the game again and the game will work fine.
The same thing happens if you choose the old CDR plugin and try to load the game. The emulator will start pcsxr_retail, ie build the old CDR source code is compiled. Try to download the game again and it will work.

Fixed BIOS sound intro the new SPU. In fact, the CED has corrected this problem in a fist working Socialist Party, but it is sure to add to their recent spu.This also fixes some strange sounds in the games such as Ace Combat 3.

Added slow download options (BIOS intro animation) on the gaming profile settings in the two nuclei (new and old versions of CDR).I added this option, since some games like Tomb Raider 4 have a strange noise sounds in the game, using a quick download (BIOS Intro) and the old CDR. Thus, using a slow boot options (BIOS intro animation will appear) and the sound will work just fine!

Description eng:
For foreign sites!
The amazingly talented french homebrew coder Ced2911 has released his XDK version of the PS1 emulator PCSXR for Xbox 360. Ced2911 released a LibXenon version of this emulator some time about but this version has been much improved over the last and it can also be run directly from F3