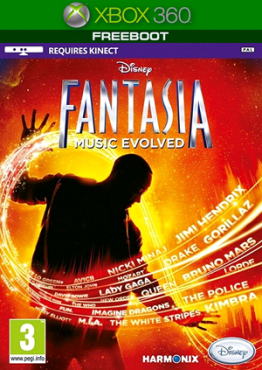 Description:
Fantasy: Magic Music / Fantasia: Music Evolved for Xbox 360 - Is to control your own movements video game inspired by a typical animated film studio Disney. You have to perform the role of a new student of the mythical magician Yen Sid and go to a magical kingdom under the name Fantasia, in order to learn the music and magic.
Harmonix Music Systems, one of the greatest game studios, known for hits Rock Band and Dance Central, offers intricate worlds to explore and discover all the secrets of musical magic.

You have to play the greatest musical works of more than 25 well-known writers such as Bruno Mars, the king of rock music of Freddie Mercury and the electronic DJ and producer AVICII.Applying the magic of motion control Kinect, you awaken to life the famous active music hits and gain strength, the ability to change themselves melodies, and each world around you!

Features Fantasia: Music Evolved
- Perform your favorite songs, including hits by Bruno Mars, Queen, Fun, Kimbrough, AVICII and other famous actors in each world. By controlling the game with support for gestures entirely controlled creation of musical masterpieces.
- Transform and mix music entirely new method. Magic manipulation will allow you to change on the fly for music subconsciously distinct and deliciously unusual method.
- Explore the breathtaking longlines together with your controlled movements "muse". I look forward to the mysterious worlds, enchanted items and much more.
- Discover unparalleled place where the music match the puzzle rewarded for curiosity and creativity.